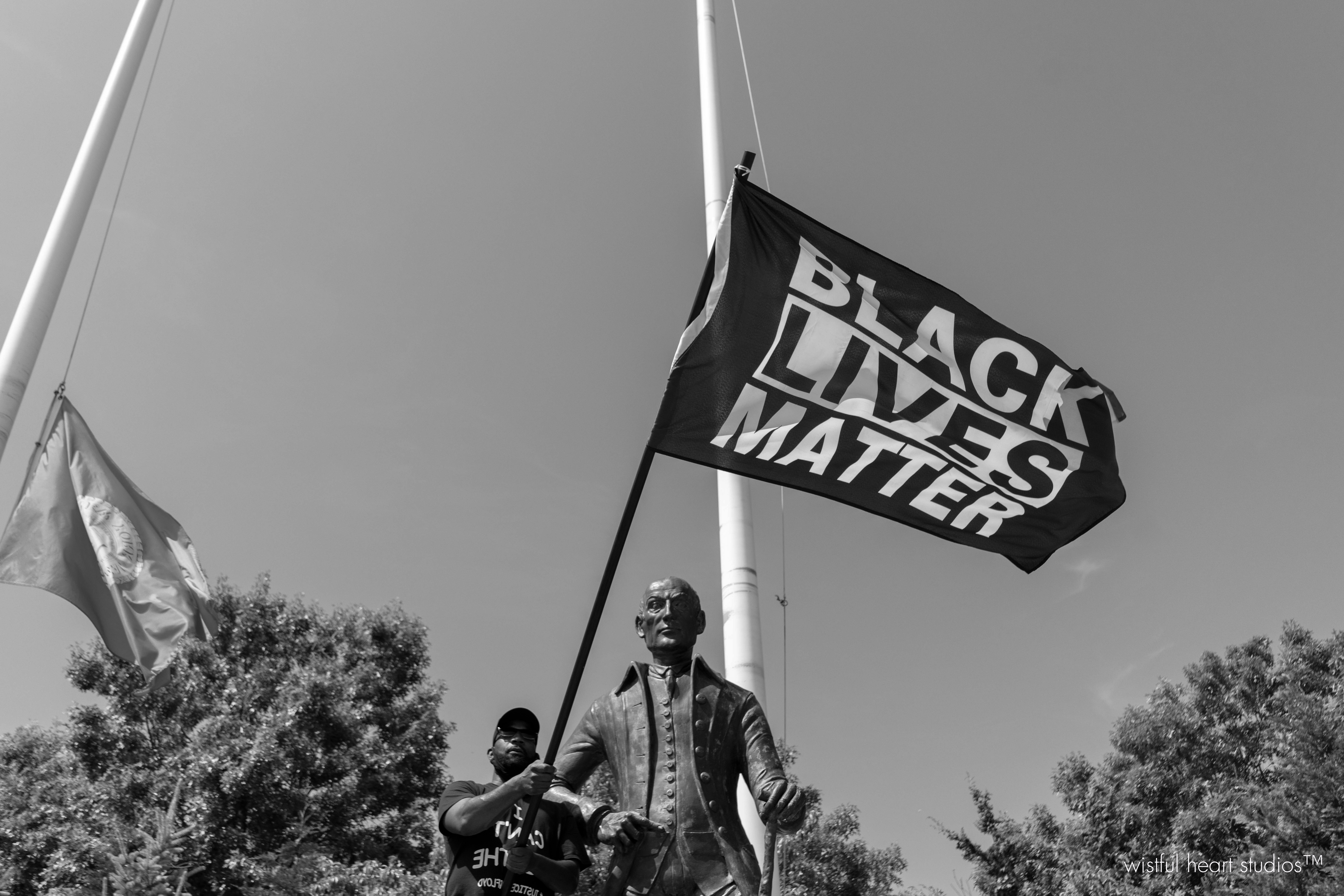 At a busy intersection in one of Long Island’s most diverse communities, a statue of William Floyd stands. In Mastic, New York, William Floyd’s name is ubiquitous; it marks a major thoroughfare and the local high school. Shirley, an adjacent town, even considered rebranding itself as Floyd Harbor in the 1980s in order to burnish its image. The William Floyd statue has been standing on the corner since 2013, but for how much longer? During this summer of racial reckoning more than three thousand people signed a petition calling for the statue to come down. A counterpetition bearing a similar number of signatures insists that the William Floyd statue stay exactly where it is.

New battlefields are emerging as the chant Black Lives Matter comes to the suburbs and rural communities. In a country where anti-Blackness is stitched tightly into the national fabric, wherever the march route ends, there is always much more work to do. In Eastern Long Island, this summer’s Black Lives Matter marches lead directly to the base of the William Floyd statue—among other places.

William Floyd was the only Long Islander to sign the Declaration of Independence. He risked life, land, and liberty to support a revolution that upended the 18th century British empire. William Floyd was also, from cradle to grave, a slaveowner and a land-grabber. The monument honoring him was erected in Mastic not in 1850, or even in 1920, but in the year 2013. This is a 21st century monument, installed on municipal land, with the support of the Suffolk County government. That no elected official questioned the propriety of installing a statue of slaveowner in the middle of a diverse community illuminates a simple reality:  memorializing William Floyd in heavy metals is a question of who has power and place.

There is little disagreement about the facts of Floyd’s life in late eighteenth/ early nineteenth century New York; it is the meaning of this history that is contested. The Floyd plantation was built on the dispossession of the Unkechaug people from their land and the enslavement of African people. These acts of violence were heritage for William Floyd.  According to Brookhaven Town records, his great-grandfather, Richard Floyd I, was buying and selling enslaved people in 1672. Young William inherited captive Africans from his father and also bought others. Ten years after signing the Declaration of Independence, William Floyd “purchased a boy named Philip.” It was never a truth self-evident to William Floyd that many of those around him– the Unkechaug “servants” that his family kept in a tight web of control and the enslaved Africans on his plantation—were deserving of any measure of freedom.

By 1790 when many of his local peers opted to emancipate their captive Africans, according to the Federal Census, William Floyd held 14 people in bondage; he was the largest slave owner in Brookhaven town. Beyond the particular individuals (known only by first name in his ledger) held on his plantation, William Floyd’s fortune was deeply entangled with “the peculiar institution.” The Floyd plantation was a node in what historian Jennifer L. Anderson calls “the Atlantic plantation complex”:  enslaved Africans working on Long Island plantations produced wheat sold to Caribbean plantations in order to feed enslaved Africans producing sugarcane for the “insatiable grinding mills.” William Floyd’s relationship to slavery is not a matter of the burial sites or the diets of the people he held in bondage until their last breath; slavery was the lifeblood of his livelihood, wealth, his political standing.  Simply put, William Floyd was not a champion of freedom for all of us.

In saying that William Floyd was a man of his time they do not say that there were other men in this time. Floyd’s time was also the time of Denmark Vesey, an enslaved man in South Carolina who plotted a rebellion to burn the plantation economy of Charleston and its plantocracy to the ground. Denmark Vesey also had something to say about freedom.

William Floyd’s time was also the time of Elias Hicks. Born within 50 miles and ten years of Floyd, Elias Hicks was a farmer, landowner, and Quaker who became an abolitionist. At the age of thirty, Hicks began to free the human beings he held as captives and spent the rest of his life preaching, teaching, and writing against the evil of slavery in America. Hicks insisted that an economic strategy, a complete boycott of slavery-associated goods, was needed to topple slavery.  On his deathbed, it is said, Elias Hick insisted that no cotton blanket, a product of slavery, should be used to cover his body for warmth or as a shroud. Elias Hicks was also a man of this time.

Those who insist that William Floyd be venerated are wedded to the notion that African enslavement and indigenous dispossession are collateral damage in a grand and glorious narrative of (white) American achievement. In this narrative, the success and wealth of Europeans and their descendants matter more than the lives of others. This, by definition, is a racist ideology.  “They teach us that, yes, he was a slave owner, but he did all these other great things. He’s presented as this complex hero. And if you feel some sort of way about that, you’re the problem. It’s like we are being gaslighted.” So says one the organizers supporting the statue removal. But slavery was not just an unfortunate detour on the road to the Declaration of Independence. Slavery is violence; the destruction of families, rape, forced labor, branded flesh sizzling, the ocean saltiness swallowing up generations. Settler dispossession of indigenous land was not an unfortunate historical outcome. It is genocide, the destruction of whole clans, histories, and knowledge traditions; it is a child’s brain matter smashed against rocks. The impulse to justify this violence as necessary, even heroic, is exactly what must be torn down, brick by brick, and word by word.

‘Where does it end?’ critics of the statue’s removal demand. ‘What will happen if we stop idolizing purveyors of racist violence and justifying their ideologies?”  Well, hopefully we will build a more perfect union! Antiracism, in the late twentieth/early twenty-first century, is, too often, a dish best served lukewarm. Ours is a society reluctant to depart from the institutions and traditions bequeathed us by violence even while fervently professing a desire for healing. In this country we stand as pillars of salt, facing backward frozen while seeking forward motion. Chanting down statues is not a substitute for legislative, economic, or political transformation, but we should not underestimate this powerful ritual. Breaking the idols to racism that casually dot our public landscape is an act long overdue. When the William Floyd statue in Mastic falls, it will not end the legacy of this or any other “founding father.” It will be a beginning. Statue removal, as much as statue erection, is a public history act; it is a way to burrow deeper into a complicated national past and make sense of it, together.

Click HERE for more information about the William Floyd Must Fall Vigil & Protest on August 22, 2020 in Mastic, NY.